welcome to the world of miura ayako

If you are on Facebook, please visit or join the Miura Ayako Book Club group. You will find the latest Miura-related news there, and are encouraged to share your thoughts and ideas about Miura's books, the films that have been made of them, and anything else Miura-related.

The Wind is Howling

Includes an analysis of some of Miura's most famous works 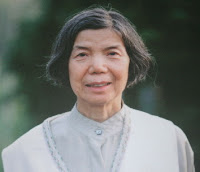 The comprehensive Welcome to the World of Miura Ayako website that I had stocked with synopses and sample translations of Miura's works, along with essays discussing her style, themes, and motivations, can no longer be accessed on the web.

Unfortunately, any links to articles on the old website from earlier posts on this blog will no longer work. Until I am able to set up an alternative website and restore the previous materials, I recommend the Miura Ayako Book Club on Facebook as a gathering place for Miura fans and as a resource for the latest Miura-related news.

Posted by dosankodebbie at 7:51 PM

the bible in the dialect of tohoku earthquake surivors 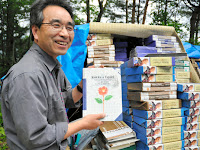 "Tsunami Bibles" help Japan to understand the tragedy 3 thousand copies of the Bible translated in the local dialect which survived the tidal wave that enveloped the country on March 11,are back on sale. They give an answer to those who suffered and will help the publishing house back on its feet.

Photo shows stacks of the Kesen-dialect Bibles that survived the tsunami. When the publisher was ready to sell the slightly damaged books at a discount, Masahiro Kudo, deputy director of the Miura Ayako Literature Museum Foundation advised him not to hesitate selling them at full price, saying "They are very precious copies. They demonstrate the love of God for the survivors." Sales will help the publisher rebuild his devastated business.

Click to read full article on AsiaNews.it (English, 英語) or here on asahi.com (Japanese, 日本語）
.
Posted by dosankodebbie at 5:17 PM

KAIREI (Asahi Shimbun Press, 1981) is one of Miura Ayako's greatest historical works. It was once made into a bilingual feature-length film and, in recent years, has been performed in several locations throughout the world as a stage play. (see details in this post)

In 1993, my English translation of Kairei was published by Dawn Press under the title Hidden Ranges. It has long since been out-of-print. With English translations of Miura's works so rare and difficult to come by, I've decided to offer an updated and slightly abridged version of my original translation at no cost to readers of this blog and members of the Miura Ayako Book Club on Facebook.

THIS OFFER HAS EXPIRED

Posted by dosankodebbie at 5:50 PM 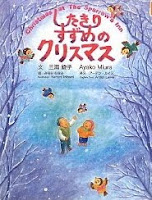 Among Miura's many, many works, there is one (and only one) play script. It was written to be performed at Christmas to an audience of children. In January of 2010, I wrote a post titled The Tongue-Cut Sparrow, Revisited in which I introduced this play in detail. To make sense of this update, please read that post now, if you haven't yet done so.

About twenty years ago, when we lived in Osaka, I translated the story into English and added illustrations so that my husband could use it in English classes and Christmas events at the college where he was teaching. More recently, I converted my translation back into simple Japanese, which I combined with my illustrations to turn it into a kamishibai (story board) for reading aloud to the children at our church here in Sapporo.

I have just learned that Miura's play was published as a picture book in 2008! Click here to see the listing on Amazon Japan and here to see the listing on Amazon US. It appears to be a bilingual version with both English and Japanese text. The English title is Christmas at the Sparrow's Inn and the name of the translator is Arden Lewis. I am not familiar with the translator, and I haven't yet seen the actual book, but if you have, please post a comment below. If you could track down a copy, I'm sure it would make the most awesome Christmas gift for the children in your life, especially if they understand Japanese or English or both.
.
.
Posted by dosankodebbie at 2:58 PM 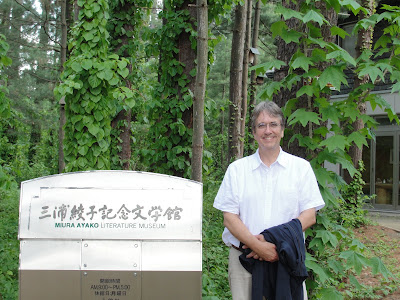 J. Philip Gabriel, professor of Japanese literature and head of the Department of East Asian Studies at the University of Arizona, has translated the works of such noted Japanese writers as Murakami Haruki and Oe Kenzaburo. Phil first came to my attention several years ago, when I came across his book Spirit Matters: The Transcendent in Modern Japanese Literature. He spends a good part of the book discussing the works of Miura Ayako (specifically Hyoten and Shiokari Pass) in a way that convinced me I had found that rare Western academic who "got" what Miura was all about and actually valued it.

Through our sporadic email correspondence, I learned that Phil was interested in writing about Miura Ayako's novel Juko, the last novel she wrote before her death in 1999. Imagine how excited I was when he emailed me earlier this year to say he would be making his first trip to Hokkaido in June! Unfortunately, I was unable to accompany Phil and his wife Junko to Asahikawa, Miura's homeground. But they went to the trouble of visiting me at my home in Sapporo, where we had a stimulating discussion on how to get more exposure for Miura's works in the West. 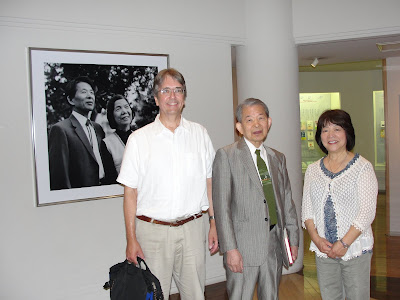 In Asahikawa, Phil visited the Miura Ayako Literature Museum where he had the good fortune to run into Ayako's husband Mitsuyo. He told me the trip hardened his resolve to write about Juko, which was very good to hear. Having a translator and scholar of his caliber committed to writing about Miura's works is a huge encouragement to me. I'm hoping that between the two of us, and with the support of our various networks, we will have more success in introducing Miura lit to English readers than we might have had on own own.
.
.
Posted by dosankodebbie at 3:10 PM

for miura fans in india!

Yoshimitsu Hasegawa, the head of the Miura Ayako Dokushokai (Miura Ayako Readers Association) will be in India on May 7 to give a talk about Miura Ayako's works and what she had to say on the subject of what it means to live.

translators who blazed the trail (2)

In 1991, OMF Books published an English translation of Yuki no Arubamu under the title A Heart of Winter. The translators were Mark Caprio and Clyde Moneyhun. They did a great job of it-- the translation makes for smooth reading. It is a slim, pocket-sized book, easy to give as a gift or carry around and read in spare moments. The copy on the back cover says: "This novel captures the depth of hurt and need for healing and wholeness... [it] illustrates, without maddening pat answers, that the bitter pain of abandonment, ridicule, betrayal and revenge need not be the final experience... Above all, this is a story of hope!"

Two months ago, one of my several attempts to contact the translators by email finally reached Mark Caprio, and I was able to ask him about his experience translating this book. This is part of what he shared with me:

We started out just looking for something to translate. Clyde and I had met at an Aikido dojo in Nagoya. By coincidence we had both studied at the University of Arizona in Tucson a few years prior to our meeting. I was an avid reader of Japanese literature at the time, making my way through Kawabata, Endo, Sono Ayako, and others.

Clyde was rather new to Japan, arriving after having completed studies in creative writing. I stumbled on Miura Ayako through a Brother George Pope. We were taught at Nanzan University and often talked over lunch about different things. I believe he mentioned Miura to me. Since he could not read Japanese I said that I would see if I could translate one of her books. Both Clyde and I were after the experience of completing a translation anyway. I remember that it was Hyoten that I first read. The story moved me to the extent of wanting to translate it. I wrote Miura asking for permission and she answered by saying that it was already being translated. Flattered that she had even answered my letter, I decided to press my luck and ask her to suggest a book to translate. She recommended her latest book, Yuki no Arubamu [album of snow]. I read it and talked with Clyde about it. We decided to translate it.

Our division of labor broke down as follows: I put her words into English, Clyde molded my crude English into prose, and I checked to ensure that his writing honored Miura's original Japanese. We had been given us a deadline--which I believe we just missed--and a contact in Tokyo who would check our work. She also had a second person, a native English speaker, in Sapporo read our manuscript. After passing the above checks we had to find a publisher. We tried Tuttle [but they turned it down] . Miura's Tokyo agent then recommended we try OMF based in Singapore [who agreed to publish it].

Unfortunately, A Heart of Winter is out of print. But like other out-of-print English translations of Miura's works, it can sometimes be found for sale on online used-book sites, so I encourage you to look for it if you don't already have a copy.
Posted by dosankodebbie at 3:23 PM